Creation of the stationery box 'Snow Flower', an offering to Emperor Akihito to               commemorate the Nagano Olympic Games at the request of Nagano Prefecture

２００４  Creation of a lacquered watch for Baselworld

２００７  Creation of a trophy for the Daihatsu Design Competition

２００８  Creation of the 'Healing Treasured Box', a music box with fifty pins.

２００９～ Study creation of the acquered watch 'Sun and Moon'

２０１０  Release of the lacquered watch 'Sun and Moon' by NICHIGETSU

２０１５  Creation of a lacquered helmet as a supplementary prize for the 2015 Super Car
Race.

Living deep in the mountains in quiet Kiso, many thoughts pass through my mind as I work. At times about life, and at other times the various phenomena in the world, they differ from day to day. Humans are strange creatures, and even at this age, I do not have a strong understanding of myself. This recognition applies to my own skills and qualities. However, I feel that if I focus on a thought in my head for long enough, it will somehow take shape.
“Realizing the dreams I have envisioned one step at a time…” I will be happy if I am able to continue to dream and pursue my dreams for all time.
Takeshi Ito
Autumn 2015 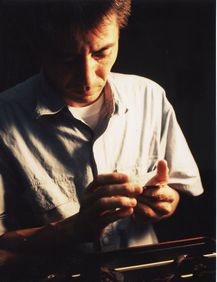